Vote Blue
Price includes shipping cost.
2020
Electroluminescent wire on Vintage Purse
15" x 12" x 3.5"
Michele Pred's purses have been featured in Vanity Fair Magazine, Style Magazine, The Financial Times, The Los Angeles Times, The Hollywood Reporter, Vogue.com, MsMagazine.com, and many more news outlets. The Victoria and Albert Museum in London is featuring one of her purses in its upcoming exhibition titled "Bags: Inside Out." Hillary Clinton and Amy Schumer both own one of Pred's Power of the Purse handbags.


Power of the Purse
Each piece is unique in that they are made with individually-sourced vintage purses. In addition, I make only 10 purses of each word or phrase.

I chose purses as my canvas as a way to marry the powerful, politically-charged language of today’s resistance with representations of women's modern economic power and the possibilities for change that come with it. For me, the use of purses from the mid-twentieth century also calls back to that critical era in the women’s movement and reminds us how much power we have to effect meaningful change.

The purses are meant to be carried and serve as small-scale political billboards. The text on each purse is created using an Electroluminescent wire that is lit up using batteries and a small electronic driver that can be set to constant or flash mode.
PREV / NEXT   3 / 51
BACK TO POWER OF THE PURSE 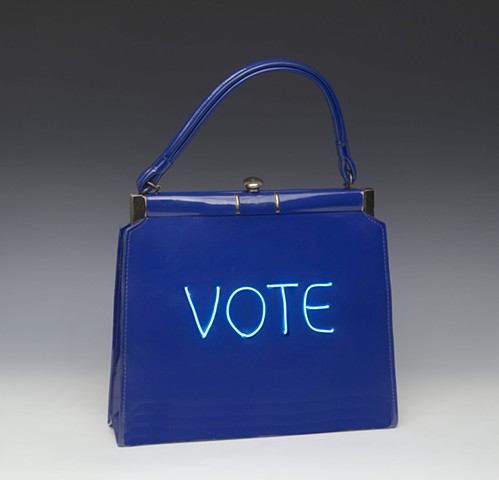