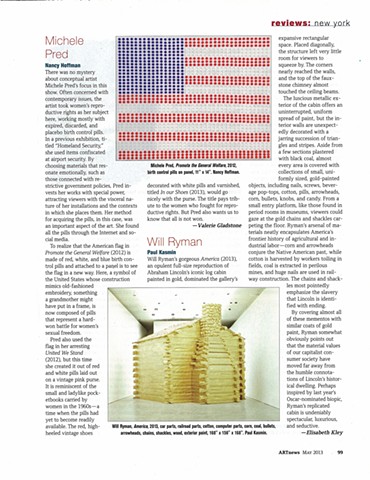 ARTnews, May 2013
Review of Amendment
< previous next >

There was no mystery about conceptual artist Michele Pred's focus in this show. Often concerned with contemporary issues, the artist took women's reproductive rights as her subject here, working mostly with expired, discarded, and placebo birth control pills. In a previous exhibition, titled "Homeland Security," she used items confiscated at airport security. By choosing materials that resonate emotionally, such as those connected with restrictive government policies, Pred invests her works with special power, attracting viewers with the visceral nature of her installations and the contexts in which she places them. Her method for acquiring the pills, in this case, was an important aspect of the art. She found all the pills through the Internet and social media.

To realize that the American flag in Promote the General Welfare (2012) is made of red, white, and blue birth control pills and attached to a panel is to see the flag in a new way. Here, a symbol of the United States whose construction mimics old-fashioned embroidery, something a grandmother might have put in a frame, is now composed of pills that represent a hard-won battle for women's sexual freedom.

Pred also used the flag in her arresting United We Stand (2012), but this time she created it out of red and white pills laid out on a vintage pink purse. It is reminiscent of the small and ladylike pocketbooks carried by women in the 1960s –– a time when the pills had yet to become readily available. The red, high-heeled vintage shoes decorated with white pills and varnished, titled In our Shoes (2013), would go nicely with the purse. The title pays tribute to the women who fought for reproductive rights. But Pred also wants us to know that all is not won.