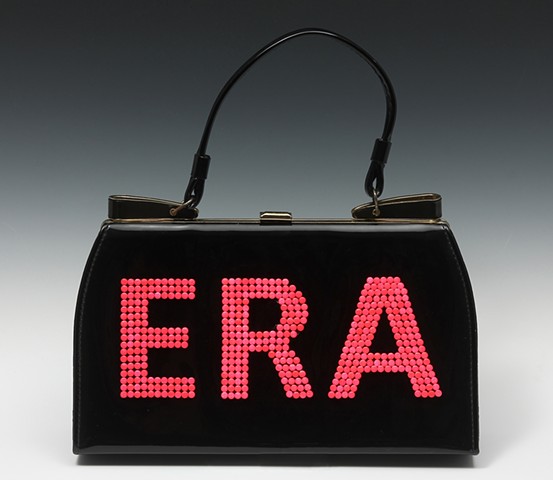 One Pill at a Time: The Work of Michele Pred by Christian L. Frock

Michele Pred’s larger body of work variously explores the wider political implications of seemingly minor personal concessions in every day life. Previous work includes Homeland Security, an ongoing series created from personal items confiscated at post-9/11 airport security checkpoints, such as lighters and matchbooks, among other objects. Pred’s consideration of these objects as materials for art making provides space to unpack the significance of what was lost – a collective sense of personal liberty, among other things – through the repetition of what was relinquished. More recently the artist has entered the contentious terrain of women’s reproductive rights, symbolized in her new sculptures by thousands of tiny birth control pills. As with Pred’s earlier sculptures, these works explore the greater concerns of small forfeitures when considered in large numbers. They also indirectly illuminate an ongoing struggle between personal and political interests.

Choice 2012 is a straightforward text piece, the title spelled out in candy pink tablets. Another work features a hatbox emblazoned with a pill-formed bulls eye. Vintage women’s pocketbooks are adorned with assemblages of hand-enameled pills organized in flag formations. Veritable icons of the 1950s and 60s, these accessories speak to the early availability of the birth control pill and the parallel women’s movement towards equal rights and opportunities. This mindful pairing – the artist scours eBay and other sources online for the exact carryalls she has in mind – challenges the viewer to consider how things have advanced over the last fifty or sixty years. Today women’s reproductive rights are still frequently under fire and remain mired in debate. The most vocal and chillingly powerful opposition still often comes from those in power, but with the advent of social media, change is afoot. Consider the recent furor when Susan G. Komen Foundation attempted to quietly defund Planned Parenthood last year. The resulting backlash online from Planned Parenthood supporters was unprecedented. When the protests became news stories funding was quickly reinstated.

This relatively new capacity for protest is also embedded in the work. The artist crowd sources pills from friends and strangers via social media online, such as Facebook, and solicits expired pills from free clinics. The size of contributions runs the gamut – some women sent the artist a few cast-offs, while others offered whole packages of pills; in exchange Pred offered each donor a limited edition print. Most of the pills in the work are placebos or expired; some, however, are still active prescriptions. Of course it is impossible to know which is which and this uncertainty heightens the political potency of Pred’s sculptures, given that access to birth control is still a matter of grave concern for many. Case in point: During her research, Pred discovered that there were no Planned Parenthood clinics in many major cities, such as Oakland, California, home to some 400,000 people including the artist. Knowing this, Pred’s work takes on a different dimension.

These pills – so small as to seem inconsequential, really – signify an enduring battle and Pred’s choice of demure, indeed ladylike, handbags reminds us of its timeline. The sculptures are representative too of a vast web of diverse personalities, each invested in the common goal of promoting dialogue around women’s rights – from the pills themselves, as discrete objects, to their use in an artwork. Whereas the original owners of these bags were limited in their ability to amplify their voices, people seeing them today are empowered to do so with free tools online. Though progress is frequently challenged, the stakeholders in women’s reproductive rights are increasingly networked. Michele Pred’s work signifies the challenges and the triumphs of women’s reproductive rights simultaneously, one tiny pill at a time. Christian L. Frock is an independent curator and writer based in the San Francisco Bay Area. Invisible Venue, the curatorial enterprise she founded and has directed since 2005, collaborates with artists to present art in the public realm. She is a regular contributor to Art Practical, SFArts.org, art ltd, and KQED Arts (Northern California public media); her writing has also been featured on SFMOMA Open Space and NPR.org, among other publications.